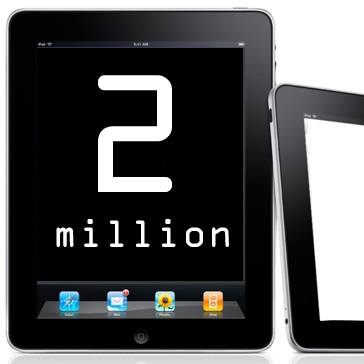 We all knew that Apple was having trouble matching supply with demand when it came to this season’s hot new piece of electronica, but until today we didn’t know exactly what that demand really was. Apple has this morning announced that, since its April 3rd release date less than 60 days ago, more than 2 million iPad’s have been sold.

While the information released didn’t get into specifics, it stands to reason that a large percentage of those were likely sold this past weekend thanks to the devices hotly-anticipated international launch.

“Customers around the world are experiencing the magic of iPad, and seem to be loving it as much as we do,” said Steve Jobs, Apple’s CEO. “We appreciate their patience, and are working hard to build enough iPads for everyone.”

It seems as though building enough to meet the demand is the biggest problem the iPad is facing right now. Supply issues were to blame for the delay of the international launch (originally scheduled for late April), and some of those countries fortunate enough to get the iPad this weekend quickly experienced sell outs.

With a second international launch coming this July and Apple still unable to meet demands, it’s anybody’s guess how many iPads will be sold in the coming months. Just don’t be surprised if today’s announcement of 2 million feels quaint by the end of the year.

Crazy Basketball, AlterNova and more! Free iPhone Games for May 31, 2010

Defend Your Castle, Extreme Lawn Bowls and more! Free iPhone Games for May 30, 2010