Apple lowers the boom on apps with offer walls 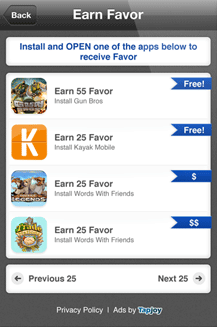 When Apple de-emphasized the impact on downloads in its AppStore ranking algorithm this past week, they also reportedly decided to clamp down on incentivized download programs, such as Tapjoy, W3i, and Flurry.

Based on numerous reports (see sources at the end of this article for more details), Apple is rejecting developers who submit apps with offers walls and incentivized offer programs, on the grounds that they are violating section 3.10 of the developer guidelines, which basically states that you can’t “game” the system.

For good or naught, these changes are creating ripple effects on multi-million dollar incentivized apps market, discovery, and the entire eco-system around developing freemium games for the iOS platform.

With thousands of games and apps being released weekly on iOS devices, it’s hard for gamers to discover games and for games to be discovered.

The best way for a game to be discovered and make money is to get on the AppStore’s Top Rankings Lists. The higher you are on the list, the more games you will sell. Essentially, getting your game on the Top List is equivalent to getting your physical product sold on Walmart’s retail shelf. It’s literally the difference between making millions of dollars or making nothing.

The problem is because there are so many games being released and the fact that Apple doesn’t make it easy to be discovered, it’s almost impossible to get on the Top Lists unless you create a game with a cute bird in it (ha ha).

Enter incentivized offer programs such as Tapjoy, Flurry, W3i, and many others. These companies provide offer walls within games where users can earn points within a game if they click on an “offer” to download an app.

Developers win in that if they are willing to pony up the money (and it can run between $50 – 100,000 per campaign!), they can guarantee that their app will launch in the AppStore’s Top Rankings and use that momentum to stay there. They can offer earn revenues if they place the offer wall in their game. And, of course, companies like Tapjoy win in that they are making millions of dollars in app discovery promotion, so much so that they recently announced that they raised $21 million from investors.

3.10 Developers who attempt to manipulate or cheat the user reviews or chart ranking in the App Store with fake or paid reviews, or any other inappropriate methods will be removed from the iOS Developer Program.

Apparently, as of this week, Apple considers offer wall incentivized programs as manipulating the system.

If this all sounds like déjà vu, it is because that it is. Last year, Facebook kicked off all offer walls and incentivized offer programs. It’s literally the same scenario, but with a different cast of characters.

There are some who suggest that Apple has put the kibosh on offer walls because they were not making any money in the transaction. When you look at it in the context of Facebook banning offer walls last year, however, it could just be that they truly believe that offer walls game the system and they want to level the playing field. The fact is, Apple owns the AppStore so they can interpret their terms any which way they want.

Whether you are a fan of Apple’s move to ban offers walls from its AppStore, the repercussions of this change are huge:

Apple needs to figure out a way to make it easier to promote great games on its platform, and do it fast, because it’s a huge hole in their ecosystem.

I have seen some awesome mobile social games in development that are coming out later this year. If there is no way for these games to be discovered or for the game companies to make money, some of these game may never see the light of day.

And if this happens, a big loser in all this may be gamers.