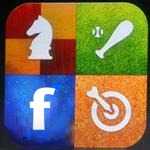 In a recent article on CNN.com, technology and video game consultant Scott Steinberg made a bold statement about Apple Game Center, the upcoming mobile social gaming platform from Apple. Steinberg called it “the Facebook of mobile gaming.” While his words feel more compliment than criticism, it’s a claim that I can’t help but take umbrage with. Apple Game Center has the potential to be much, much more than simply Facebook for mobile gaming.

No one is questioning Apple Game Center will provide an outstanding mobile home for the social gamer, but its scope hardly seems to be that limited. In his article, Steinberg suggests that “games for the iPhone, iPod Touch and iPad tend to be less sophisticated,” than those on devices like the Nintendo DS and Sony PSP, because “puzzles and arcade outings [on the iPhone are] more common than first-person shooters or sprawling role-playing adventures.”

While it’s true that casual gaming fare makes up a greater percentage of games on the App Store, it’s equally true that core games like Street Fighter IV, Call of Duty, and Madden remain among the top grossing apps on the service. What’s more, games aimed at this demographic are largely rooted in what Apple Game Center is trying to accomplish.

Online multiplayer, achievement-based challenges, and competitive leaderboards have long been the hallmarks of traditional online gaming services like Steam and Xbox Live. The standard Facebook gaming format may have borrowed some of these elements, yet few would have a hard time telling them difference between Facebook-style “social gaming” and PC and console “multiplayer gaming.” What makes Apple Game Center so unique is that it doesn’t simply have to be Facebook gaming for the iPhone or Xbox Live for the iPhone – it can be both.

Like the DS before it, the iPhone is a device that has managed to do the seemingly impossible – appeal to casual and traditional video game players alike. As such, we’ll be downright shocked if Apple Game Center doesn’t reflect that diversity when it’s released to the public later this year.

The business and legal implications of shutting down social games

The Profiler, The Time Machine and more! Free iPhone Games for July 5, 2010