Home / News / AppGratis pulled from the App Store; CEO just as surprised as you are

AppGratis pulled from the App Store; CEO just as surprised as you are 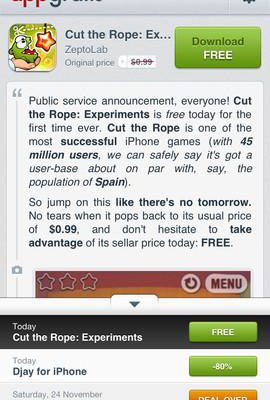 When the popular app discovery application AppGratis mysteriously vanished from the App Store last Friday without any warning, millions of users were left scratching their heads, and wondering what the future of their favorite app might be. In the hours that followed, it slowly began to dawn on the mobile community that Apple had removed AppGratis from its iOS App Store: in a serious blow to the app discovery company, who was hot on the heels of getting approved for an HD version of their app for iPads.

For those of you who might be unfamiliar with AppGratis, the application functions as an app discovery service, which offers an easy way to help mobile users discover cool new apps that may not have been featured on the main App Store home page. AppGratis increases the exposure of lesser-known apps by offering a paid app for free every day, not unlike a number of competing services still live on the App Store.

But of course, the problem with this is that Apple has a number of strict policies against downloading third-party apps, and especially against the sale and distribution of apps through other platforms that are not the iOS App Store. It’s no secret that there has been an ongoing frustration among gamers and developers alike over Apple’s rigid rules and regulations, as the App Store has become an increasingly difficult place to navigate and find new apps and games. In one of their latest firmware updates, Apple removed a feature that let users browse new applications by release date, which made it more difficult for smaller independent developers to get their games noticed, or benefit from any kind of promotion on the platform.

Left in the dark all weekend, rumors began to circulate among mobile gamers and industry experts that AppGratis had been illegally using bots and other tactics to secure their continual stream of revenue and influx of new users. AllThingsD first broke the news that AppGratis had in fact been pulled from the App Store, after Apple confirmed to the news site that the App Discovery application was in violation of two clauses in the App Store Review Guidelines. The regulations in question are as follows:

– 2.25: Apps that display Apps other than your own for purchase or promotion in a manner similar to or confusing with the App Store will be rejected.
– 5.6: Apps cannot use Push Notifications to send advertising, promotions, or direct marketing of any kind. 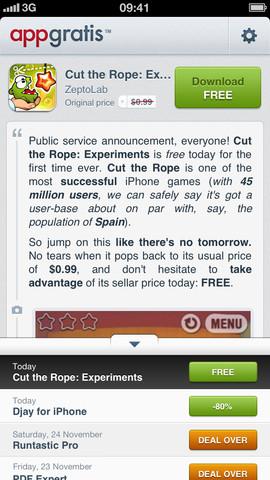 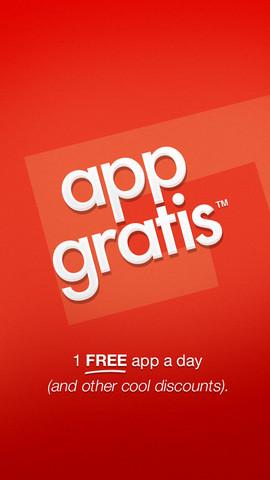 Apple has stated that AppGratis is welcome to resubmit their app for approval, although it was heavily implied that the changes required to make the app acceptable would be pretty substantial. The powerhouse creators of the iOS platform also claim to be looking into other App Discovery services for possible termination from the App Store in the weeks going forward. This isn’t the first time an App Discovery app such as AppGratis fell under fire from Apple for violating guideline regulations. You might remember the popular AppShopper app meeting an early demise last December for violation of the same 2.25 clause, which has still yet to make a return to the App Store.

And so just like that, it seemed like AppGratis was no more. But this week, Simon Dawlat, the CEO and founder of AppGratis in 2008, has given his side of the story in a truly captivating read on his company blog. I encourage everyone to read it when you have the time, because it really puts the entire situation into perspective. But for now, here is the Cliff Notes version of what went down, from Dawlat’s point of view:

In October of 2012, an issue was first raised by Apple in regards to a new update to the AppGratis app, which was said to have violated a clause of the App Store Guidelines regarding “spamming” the App Store with too many similar applications. The complaint was in response to the multiple apps that AppGratis had developed for an easier means of bringing their service to other countries: a problem AppGratis had in fact recognized themselves, and had already begun the process of consolidating their 20+ apps into one singular service to avoid any extreme repercussions. In the resulting discussions with two Apple App Review team members, issues of clause 2.25 were also brought to light and OK’d by the Apple representatives. Both parties came to an agreement, and the v3 version of AppGratis for the iPhone was approved in November 2012. Shortly after, AppGratis secured a $13.5 million funding from new investors to prepare for the year ahead.

Now here’s where things get a little weird. The iPad version of AppGratis HD was approved for sale by Apple on Thursday evening, April 4, just a few short hours before the apps would be removed. Everything seemed to be going smoothly without a hitch, and as Dawlat boarded a plane to visit his internal office in Brazil, Apple pulled the plug on AppGratis. According to Dawlat, a different Apple representative he spoke to in following the app’s removal was very callous about the situation, and explained to the AppGratis CEO that the app’s removal was simply Apple protocol, and kept repeating the violations of regulations 2.25 and 5.6.

Jobs in jeopardy? The AppGratis team is currently 45 employees strong.

The 45 employees at AppGratis, and especially Dawlat himself, are still unclear as to what exactly happened, and how Apple essentially changed their minds overnight. In working through his confusion on his blog, Dawlat denies any previous rumors or claims that he had knowingly tried to go behind Apple’s back and conduct illegal actions for the sale of third-party apps outside of the App Store. Those “advertisement Push Notifications” that AppGratis were penalized for were simple “Today’s deal is here!” updates, that I’ve seen used on countless other applications before.

If there’s one thing to take away from Dawlat’s response to the whole unfortunate circumstances, it’s that AppGratis is still far from being finished, and the CEO has vowed that he will continue towards “accomplishing a much needed mission in a broken App Discovery world.” For those of you among the 12 million users who had downloaded the AppGratis app before last Friday, you will continue to be treated to daily game updates as usual. For everyone else, Dawlat is already hard at work towards finding a solution, and promises more announcements soon as the whole situation is continued to be sorted out.

If you have ever used AppGratis before, or any of the other App Discovery outlets that are aimed at helping mobile users find engaging new content, then you most likely have a stake in this ongoing discussion. The entire conversation begs the question once again: is Apple getting too strict in their App Store regulations? Are they weeding out too many third-party developers that are trying to help the iOS App Store for the greater good, and burning too many bridges in the process to make the App Store an “all Apple” world?

We will undoubtedly have more updates on this story in the days going forward, but be sure to sound off in the replies and let us know what you think of Apple’s latest full measures, and if their termination of the AppGratis app was entirely warranted.