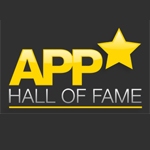 Have you ever wondered how new iPhone owners can discover gems of the past in the all-too-cluttered App Store? Jeff Scott wondered the same thing too. The founder of 148 Apps (and the brains behind The Best App Ever Awards) has just unleashed a new website on the world that answers this very question: App Hall of Fame.

Why do we need an App Hall of Fame? The explanation on the official website sums it up nicely;

“Discovering the very best apps is an increasingly difficult task. There are so many new applications released that it becomes harder and harder to find the gems in the crowd — especially so once that special new app smell wears off. That’s why we’re here. The App Hall of Fame exists to archive the very best of the best in mobile apps. The apps inducted into the hall of fame are considered to be the very best in the app store, the cream of the crop, as it were.”

Each and every month, the App Hall of Fame will welcome 12 new inductees into their collection. At the moment, the site is focused entirely on iPhone and iPod Touch apps, though there plans to add iPad, Android, and other relevant platforms in the future.

Of the twelve apps selected for the inaugural class, six were games. So what games made the cut?

While four of the entries absolutely belong on this list, there are two I can’t help but take umbrage with. Plants vs Zombies, while delightfully fun, is little more than a PC port. In my opinion, that makes this a strange choice for an App Hall of Fame. Similarly, Homerun Battle 3D may be a blast, but it’s hardly attained the iconic status that the rest of the inductees have. Games like Fruit Ninja, Pocket God and Canabalt seem to be far more Hall of Fame worthy than these two choices. But then again, controversy and conversation is half the fun of a list like this, isn’t it?

If you were going to pick a game for the App Hall of Fame, what would it be?

DeNA acquires ngmoco for up to $400 million