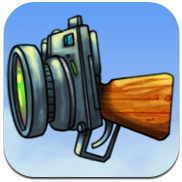 Everybody likes to buy games. Heck, that’s the whole reason you read this site. But have you ever wanted to actually own one? Neil Schmidt wants to give you the chance. He’s the developer of a moderately successful game called Buckshot, and he’s selling complete ownership of his game on the internet’s most popular auction site, and the bid started at only $1.

Not only will you have complete ownership of Buckshot, but you’ll also have the other apps associated with his iTunes Connect account – Buckshot Free, Popular Brands, Popular Faces, Popular Movies, and Popular Places. Neil claims that Buckshot has 20,000 registered users, and brings in about $300 a month. What’s more, your purchase comes complete with a tutorial from Neil himself to learn “everything you need to know on iTunes Connect.”

But if the game is profitable, why sell it? Neil spoke to TechCrunch, and told them that he’s generally fed up with Apple. He’s not happy about paying $99 annually for iTunes Connect, losing 30% to Apple, and waiting more than a week for review whenever an important update needs to come out. He’s ditching this in favour of HTML5 development.

So there you have it – a nice, simple, business that the developer promises is the “easiest thing in the world to maintain.” The current bid is $3,050, and the auction closes Thursday morning at 9:18 PST. If any of our readers are the lucky bidder, be sure to let us know!