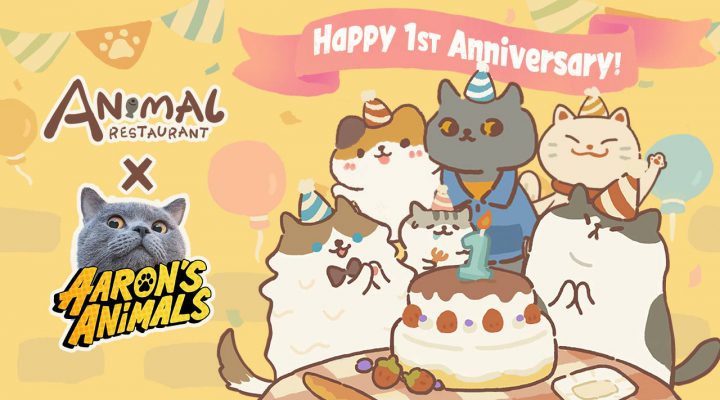 Animal Restaurant is one year old, and it’s achieved a hell of a lot in that one year. Not only has the game racked up an impressive 10 million downloads, but it’s broken into the top 10 free games chart in ten different regions.

Like many developers, DHGames has chosen to mark a major anniversary with a series of in-game login events. By loading Animal Restaurant up between now and the last day of the month, you can get yourself some free wallpapers, mementos, customer letters, a new dish to serve, and more.

Unlike most developers, however, DHGames has also arranged for a celebrity cameo. Until December the 17th, Prince Michael, feline star of the vastly successful Aaron’s Animals YouTube channel, will appear in Animal Restaurant.

Animal Restaurant is a gorgeous game with a stylish, picture book aesthetic. The gameplay, in case you don’t know, involves feeding these animal customers in time-management fashion, assembling dishes to order while your diners wait.

In addition there’s a decorative aspect to the gameplay, as you customize your restaurant and cultivate your garden with items from around the world, and a deeper interactive element in which you get to know your clients and make choices about how to deal with them.

Customers will confide in you across the counter, sharing gossip, divulging secrets, and sending you letters. You can choose to back them up, argue with them, and even roll up your sleeves and change their lives.

And for the next few months they’ll be joined by a bonafide social media superstar, with his own exacting palate and rigorous culinary demands. To unlock Prince Michael, just unlock some fortune cookie recipes from the in-game store and get your restaurant up to the required level.

You can download Animal Restaurant for free on iOS and Android.

Adventure Box Lets You Import Your Own Imaginative Creations into Minecraft