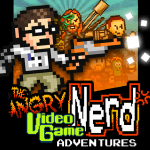 Pretend you’re eight years old again. Now imagine you’re in your parents’ basement, chipping away at a Mega Man game on your NES. You blast some low-rank enemy, maybe an Octopus Battery. Suddenly, Mega Man turns at you, scowls, and flips the bird. Whoa! That would never happen, right? Probably not (at least until Capcom attempts a gritty reboot for the franchise). Good thing we have the newly announced Angry Video Game Nerd game to give us a hearty dose of 8-bit gaming goodness mixed with cursing.

The Angry Video Game Nerd (A.K.A The Angry Nintendo Nerd, or “The AVGN”) has used the Internet to swear at awful retro games for some time now. Furious game criticism often segues into video game development, and Mr Rolfe has decided to take that natural step.

There’s little information about the game thus far, but it appears to utilize pixel-based graphics and chiptunes (check out that 8-bit version of the show’s theme song!). If you want to scream and swear at the Nerd’s game, visit its Steam Greenlight page.