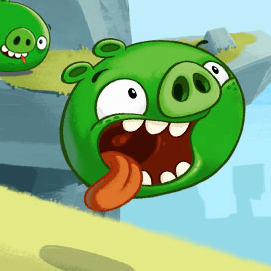 Hallelujah, it’s rainin’ birds. Earlier today, Rovio announced that its long-awaited Angry Birds Toons will sail into our lives on March 16 and 17. Rovio plans to release 52 episodes per year, and the basic premise around most of the shorts appears to revolve around (sit down for this one) the Pigs’ attempts to steal the Birds’ eggs.

The show will forego speech in favor of expressive motions and over-the-top antics. The Pigs lust after the birds’ eggs, the Birds try and stop them, and everybody gets into plenty of shenanigans in-between. But will the Birds and Pigs ever embrace and come to a mutual understanding? Let’s hope not.

Angry Birds Toons is not Saturday morning fare: Each episode clocks in at a few minutes, and will be distributed exclusively through the Angry Birds mobile app. That said, if you want to pour yourself a big bowl of Mr. T cereal while you watch, we totally support your decision.

Angry Birds Toons should be a good warm-up for the Angry Birds movie, which is coming in 2016.

Gemini Rue adventuring on over to iOS