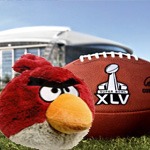 Footballs and Angry Birds have a lot in common. They’re both well-aimed projectiles intent on hitting their mark. They’re both loved by millions of Americans. They’re both coated with pig skin. So it should come as no surprise that Angry Birds will be invading your television sets this Sunday night as the birds take flight in an ad during Super Bowl XLV.

The ad won’t be for Angry Birds alone – instead it’s merely a benefit of their recent marketing partnership with 20th Century Fox for the upcoming family film Rio. The 30-second commercial will air during the game’s fourth quarter, and will feature an embedded code that will allow Angry Birds players to download an exclusive new level.

While the commercial itself is intended to promote the film Rio, there’s no mention of whether or not the Angry Birds characters will feature in the ad, or if a code for the game will simply be snuck in somewhere. If I were a betting man (and when the Super Bowl’s involved, who isn’t?) I’d think the truth will be closer to the former than the latter.

And if it does feature the Angry Birds, try to pay close attention to the animation. The commercial is being produced in-house by Fox. If it resembles the teaser trailer for Angry Birds Rio, I’d say we have our first real clue in figuring out who might be producing Rovio’s upcoming Angry Birds animated series.