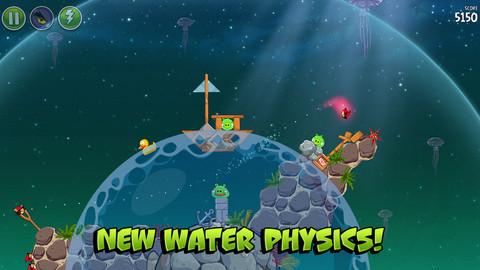 Regardless of how you feel about the Angry Birds franchise, there’s no question that Rovio does right by the fans. There’s an endless supply of merchandise in pretty much every store under the sun, and the games receive content updates on a consistent basis. In fact, Rovio has just pushed live an all new pack of levels for Angry Birds Space, and even gone to the trouble of writing up a whole new set of bird and pig puns for it. Now that’s dedication.

The update includes 30 new levels, all of which take place in a watery world known as the “Pig Dipper.” Several new power-ups have also been introduced, including the Pig Puffer, the Space Egg, and the Flock of Birds. If you demand more, well, I suppose you’ll be happy to hear that the update also features a brand new boss, along with a handful of bonus levels. Happy now, greedypants?

In the off chance you’ve never played Angry Birds Space before, it features the same type of physics-based puzzles of previous Angry Birds games, only it’s set in (spoiler alert) space.

Sorry if I just blew your mind.

The 5th annual Best App Ever awards are officially underway