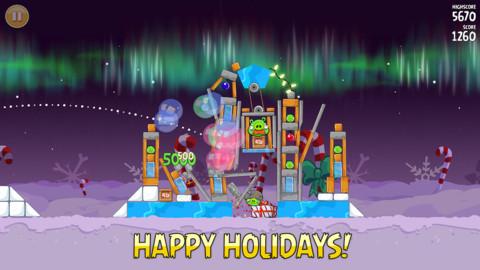 I know, I know. A Christmas update to Angry Birds Seasons was pretty much inevitable. But don’t let that put a damper on your excitement! Players can expect 25 new levels throughout the month—one a day until we finally reach Christmas. As developer Rovio puts it in the update in the App Store description, the birds have found themselves in a “Winter Wonderham.” Having written an amount of bad puns that likely nears the quadruple digits, I feel qualified to say that’s one of the best-worst ones you’ll ever see.

Aside from boasting a festive appearance and aurora borealis backdrop, the levels will also be home to slippery ice floors that cause the birds to slide around all willy-nilly. If that’s not enough to put you in the holiday spirit, there will also be three hidden levels to discover, along with a special “Harbin” level to commemorate the Angry Birds section of the upcoming Ice and Snow World festival in Harbin, China.

With Angry Birds Seasons having received its requisite Christmas update, we can’t help but hope that Bad Piggies receives one, as well. The thought of driving a green pig around in Santa’s sleigh is all too appealing.

Tiny Tower gets into the holiday spirit with latest update