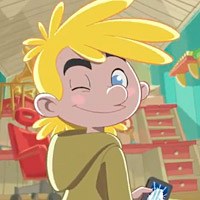 1 billion is a mighty large number. So large, in fact, that I actually had to stop to think about how many zeros were in it. It’s nine. I think. Rovio doesn’t have to guess, though – because today they announced that the Angry Birds franchise has seen 1 billion downloads. That’s one download for every 7 people walking the Earth.

What’s even more remarkable, though, is how quickly they managed to hit that number. It was only November that the company announced it had reached 500 million downloads. They’ve managed to double that number in just 6 months. And that’s just one franchise! Can you imagine how successful Rovio would be if they had two?!?

At the end of a video celebrating their first billion, the promise “more amazing things coming soon!” and the image pans back to reveal a character that looks suspiciously like a re-imagined Casey from Casey’s Contraptions. Did Rovio purchase Casey’s Contraptions developer Snappy Touch?

It doesn’t look that way, but all signs are pointing to the likelihood that Rovio has purchased the IP from the independent developer. Either that or they’ve entered into some kind of a publishing relationship together.

Neither Rovio nor Snappy Touch have confirmed anything quite yet, but Snappy Touch’s Noel Llopis told his Twitter followers “Before rumors start flying, Rovio is a perfect gentleman. Not a Zynga at all. Don’t worry, all is well :-)” Later, Llopis further elaborated on the situation in a conversation with Gamasutra: “”I’m still very much an independent developer, and I’ve been working on prototypes for my next game full time for the last few months.”

So what contraptions of Casey’s will be coming from the house that Angry Birds built? We’ll have to wait and see.

Bigpoint and Square Enix team up to reveal Gameglobe