Home / News / Angry Birds: Coming soon to a theater near you?

Angry Birds: Coming soon to a theater near you? 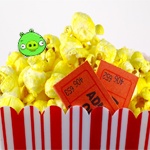 Earlier this week, Angry Birds developer Rovio confirmed in an interview that they were using the “Tetris strategy” to get their games in the hands of as many different people as possible. Now after confirming the possibility of a Hollywood adaptation, it might be more apt to call their approach “the Mickey Mouse strategy.”

In a recent interview, Rovio CEO Mikael Hed told Reuters that the company wants to turn Angry Birds into an entertainment brand, much like Disney has done with characters from Pixar films like Toy Story or Monsters, Inc. “We want to go beyond games,” says Hed.

The interview further goes on to confirm that Rovio has held talks with major Hollywood studios, though no deals have been cemented at this time.

With more than 6.5 million downloads, Angry Birds already has the built-in audience that studios look for. And with a Looney Tunes inspired trailer for the game already making viewers chuckle, it seems as though there may be enough potential to turn the viewing experience into something more substantial.

At the very least, maybe the birds could knock down that snarky Hollywood sign the next time they’re in town.