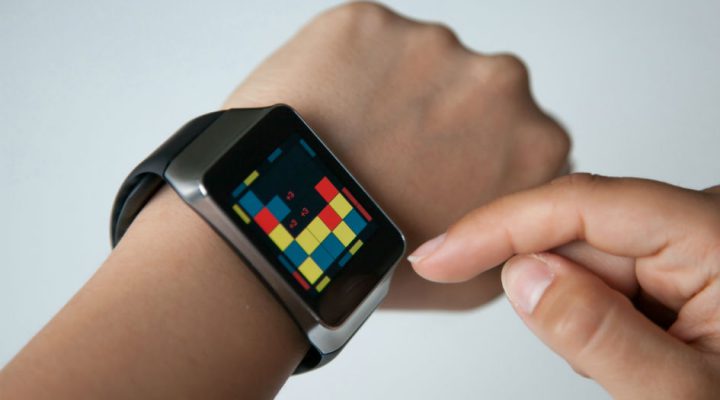 My brother had his twelfth birthday party at a bowling alley. One of his gifts was a digital watch that played Tetris. He managed one game before a clump of block graphics and a string of 8’s tattooed itself forever on the cheap liquid crystal display.

Swip3 by Unit9 Games won’t give up on you so easily, though. This block-matching app is the first game designed specifically for Android Wear smartwatches. It’s available on Google Play for $1.69 USD.

The smartwatches, which are being offered by Samsung, Motorola, and other companies, are a convenient way for users to check their email, calendar, and social apps while on the go (oh, and they can probably give you a clue about the time, too). But it’s unthinkable for a smart device to be bereft of a game for long, which is why Unit9 jumped at the opportunity to be a pioneer.

“We started this project after being impressed by the technology in the Android Wear,” Steve Brown, the business development manager for Unit9, told GamesBeat. “We knew we had to make the gameplay simple but addictive due to the constraints of the device.

“The game itself is designed so it fits in the tiny screen of a watch and all you have to do is simply swipe your Android Wear with your finger to play. At any point all the user has to do is make a choice: left, down, up or right. And it’s not always obvious which is the best choice.”

Swip3 is designed for smartwatches, but it works on mobile platforms as well. There’s also a web-based version that you can try out for yourself.

Hearthstone: Curse of Naxxramas is LIVE