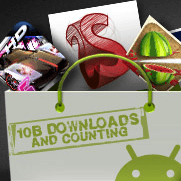 Google’s Android Market has managed to take the internet by storm over the past couple of years. By July 2010, a billion apps had been downloaded. Since then, things have been growing exponentially: 3 billion apps had been downloaded by March 2011, 6 billion by this July, and now the number is up to 10 billion. Google thinks it’s time to celebrate, and we don’t blame them in the least.

Google is partnering with a number of Android developers in order to make various apps available for a pretty stellar price. Starting yesterday, Google is offering a bunch of apps for only $ 0.10 each. These apps are only available at this price for a day at a time, and the sale will last a total of ten days.

Today, the sale includes the following apps: Fruit Ninja, Flick Golf, NFL Rivals and Reckless Racing. Be sure to visit the 10 Billion Downloads page on the Android Market to find out which apps are discounted each day!

Bejeweled 2 + Blitz on iOS getting split into two new games