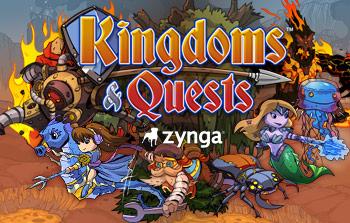 Adventure World is the next release from Zynga, but even though it doesn’t even have a launch date details about the developer’s next next game are already slipping out. Called Kingdoms & Quests, the game is currently in an Australia-only beta, and looks to be Zynga’s first foray into the world of fantasy role playing games.

As spotted by Games.com, a support page for the game was available on Zynga’s site, but has since been taken down, and it reveals some details about the game. There’s combat, crafting, and equippable gear, as well as social gaming mainstays like energy, experience points, and resource harvesting. There’s also something called the fog, which covers up much of the world, and it sounds very similar to a feature found in the recently released Magic Land from wooga.

It sounds like the combat might be similar to that found in another Zynga game, Empires & Allies, as you will have an army with multiple units that will used in battle. You can equip units with weapons and armor to improve your chances and the combat itself will be turn-based. The game also features some sort of real-time social element, that lets you play with friends who are online at the same time.

Even though it hasn’t been officially announced, the support page says that Kingdoms & Quests will be released worldwide “soon.”

Update: Zynga has since issued a statement, telling Gamezebo “We are constantly testing new products and features, and look for player feedback to help make our games the most fun and social. We are currently testing a new game in Australia and we look forward to receiving players’ feedback on it.”