Home / News / And just like that, Apple invents their own Wii U

And just like that, Apple invents their own Wii U 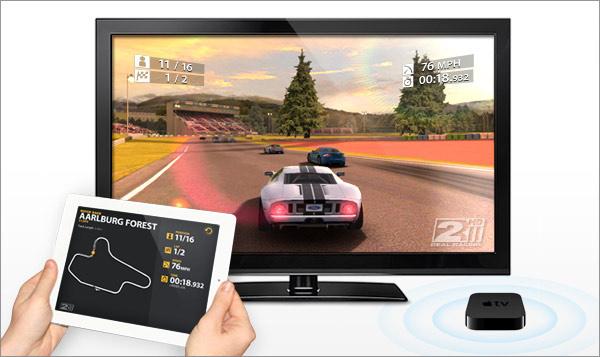 When Nintendo unveiled the Wii U at E3 2011 yesterday, our first impression of the device’s “keep gaming on your controller without the TV” functionality was that it seemed a little like a reverse version of Apple’s AirPlay, but for games. Now Apple is blasting back, albeit indirectly. Top iOS developer Firemint has just announced that Real Racing 2 HD will soon be playable on your TV, using the iPad 2 as your controller. This startling development will all be made possible thanks to the features found in AirPlay, Apple TV, and iOS 5.

“Firemint will again redefine the entertainment landscape with completely wireless, big screen TV gaming in its flagship title, Real Racing 2 HD, come the release of iOS 5 later this year,” says a press release pushed out by the company early this morning. “By harnessing the power of AirPlay in iOS 5 and Firemint’s dual-screen technology, Real Racing 2 HD will deliver an unrivaled, must-be-seen-to-be-believed gaming experience to players worldwide.”

Firemint may be the first out of the gate, but like any good race, don’t be surprised if the competition ends up following closely behind. By the time iOS 5 launches this fall, I’d expect a slew of developers to have similar announcements in the works.

iOS gaming in your living room? Maybe Apple TV is going to be the gaming device we were all hoping it could be after all.