Home / News / Amongst other platforms, Team Meat’s upcoming Mew-Genics is headed to iOS 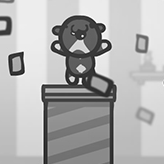 There’s a whole lot we’ve yet to learn about the upcoming Mew-Genics (like how it’s played), but developer Team Meat has revealed on their blog that it’s coming to—alongside other, unannounced platforms—iOS. Are phones and tablets capable of handling 12,207,031,250,000,000,000,000 cats? I suppose we’ll find out soon enough.

Since we’re already on the subject, let’s do a quick rundown of what we currently know about Mew-Genics: the music will be done by Matthias Bossi and Jon Evans, there will be a ton of “trinkets” with randomly generated powers, and there will be cat pageants. Needless to say, this game is going to be extremely, gloriously weird.

Now, before you get all worried about the status of Super Meat Boy: The Game, Team Meat has made it clear that it’s still coming along nicely, and it will be their main focus once Mew-Genics is complete. Patience is a virtue, you guys.