Home / News / Amazon’s $99 box might be called Fire TV, but it’s the games that have me interested 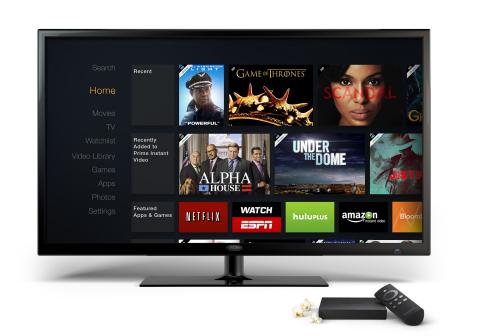 Amazon pulled a Sega Saturn today (perhaps not the most auspicious comparison) and announced that you can buy the Fire TV for $99 at this very moment.

The device is a clear competitor for set-top boxes like Apple TV, Chromecast and Roku. You’ll be able to stream video from the obligatory services like Netflix and Hulu Plus alongside Amazon’s own Instant Video apps.

On the hardware end, it sports a dedicated graphics processor, 2GB of RAM and a Mimo dual-band wifi which, theoretically, makes it three times faster than those other devices I just mentioned. It also has voice control, so everyone can know when you’re binge-watching Scandal as you shout it out to an empty room.

What’s most interesting about the little black box is how open it is. It operates on the open Android operating system, meaning it’s very simple for software designers to bring content to the device in just about any way they choose. To me, that smells like a greater focus on games than its prime competitors.

Last month we got a leaked sneak peek of Amazon’s dedicated game controller, and lo and behold you can purchase it now as well for $39.99 on the digital storefront. According to the company’s press release, the controller is entirely optional, as you’ll also be able to play using the remote control included with the box. Still, a first-party controller available day-and-date with the device is a great sign of Amazon’s faith in games as a core component of the hardware.

Games like Minecraft and The Walking Dead are attention-grabbers, but Amazon Game Studios is also showing off its own, internally developed content via YouTube. Their “sneak peek” video shows off a number of games, though the catapult defense game with what looks like hundreds of monsters onscreen at once piqued my interest in particular.

Their YouTube channel also features a launch trailer for Sev Zero, which it describes as a “fast-action shooter mayhem with tower defense-style strategic base building.”

The promise of being able to play Android games with a controller on a TV device that sports more utility than something like an OUYA is actually quite appealing. While I doubt it will replace my PlayStation 4 as the primary Netflix-box in my house, I have to admit I’m quite tempted to pick one up for the prospect of games alone.

Hellraid: The Escape draws inspiration from The Room