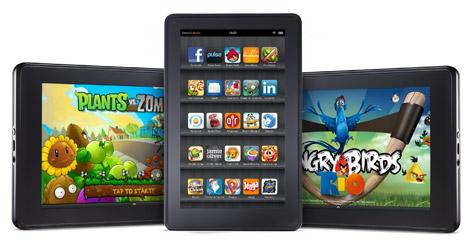 When it comes to tablet computers, there’s the iPad, and there’s everything else. Since Apple introduced it’s “not quite a desktop, not quite a phone” device in early 2010, every other manufacturer under the sun has tried to play catch up – and almost all have met with dismal results. HP’s Touchpad was quickly discontinued and dropped to $99. The Blackberry Playbook has just started down the same route. And Android tablets, while doing modestly well, haven’t seen nearly the success that the iPad has. Thanks to Amazon, though, all of that is about to change.

The clues have been there for a while now, but Amazon has finally revealed that the successor to their Kindle e-reader is more tablet PC than digital paperback. Dubbed the Kindle Fire, this new device is going to bring all of Amazon’s recent digital services to a single device with a 7 inch display. Amazon Android App Store? Check. Amazon MP3 service? Check. Kindle bookstore? Cloud storage? Double check.

Price point, it would seem, has proven to be the barrier that’s stopped the average consumer from jumping into the tablet market. The HP Touchpad illustrated this when its $99 clearance price hit, as the once dust-covered devices flew off store shelves in a matter of hours. And at only $199, the Fire’s not only cheaper than the iPad – it’s even cheaper than an iPod Touch.

Amazon has really tested the waters in recent months when it comes to gaming, making bold moves like securing timed exclusives for Android ports of games like Angry Birds Rio and Plants vs. Zombies. Could such exclusives get bigger in scope? Could the Kindle Fire get games not only before other Android devices, but even before iOS platforms? It doesn’t seem out of the realm of possibility. And with the recent formation of Amazon’s social games group, device exclusives seem all but certain.

With a November 15th release date and a ridiculously low price tag, it seems as though the Kindle Fire might just become the hottest selling device of the upcoming holiday season. You can pre-order now from Amazon.com if you don’t want to be left without, though if you’re not totally convinced yet, we wouldn’t blame you if you decided to wait a week and see what Apple has up their sleeve in response.