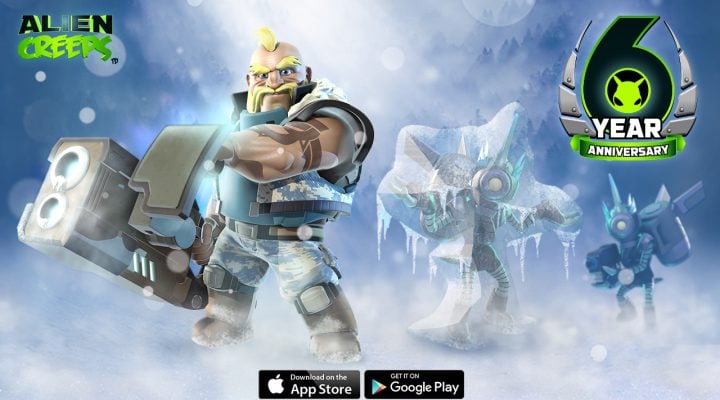 Outplay’s Alien Creeps TD is one of our favorite tower defense games on mobile. It’s right up there with the Kingdom Rush games, with similarly stellar user ratings on Google Play and the App Store.

As its name suggests, Alien Creeps TD sees you fending off an alien invasion. Intergalactic monsters are snaking their way through the stages, pouring in from multiple entry points, and you need to cut them down with your towers, heroes, and infantry units.

Alien Creeps TD first came out in 2014, which means this year the game is celebrating its 6th birthday. To mark the occasion, Outplay is holding a series of events, starting on May 25th and lasting all the way through to July 6th.

Fittingly, this celebration is brought to you by the number six. The event lasts for six weeks, features six new and exciting bosses, and gives you six times the normal value with a variety of discounts and cut-price bundles.

Here’s the lowdown on those bosses. The first, Gunker, attacks your towers by spitting on them. Its gunky saliva reduces their damage. The second, Phantom Tank, is a powerful boss that can vanish into stealth mode. The third, Buckler, disappears into his own mobile fortress when his health gets low, making him difficult to kill.

Next up there’s the Glutton, who eats friendly creeps for medicinal reasons. Then there’s the Mender, a troublesome healer unit who undoes the damage your hardworking towers and heroes have inflicted on your enemies.

And finally there’s the Dyna-Mite, an insectoid nuisance that explodes upon dying, inflicting serious damage in the process. As you’d expect, these bosses get tougher as they go on.

Plus, there are discounts galore – and that’s just for the event. Alien Creeps TD is a must-download, event or no event.

It looks great, with polished arcade visuals, and it comes with a wealth of content, including a huge number of levels, three modes, an additional 58 two-minute challenges, a whole arsenal of towers, heroes, and units to unlock and upgrade, and a neat Airstrikes and Reinforcements system, which lets you invite allies to help.

You can download Alien Creeps TD for free right now on Google Play and the App Store by clicking here.

Dungeon Deep is a Roguelike RPG with Match-3 Puzzler Presentation