Home / News / After Burner Climax soaring on over to iOS

After Burner Climax soaring on over to iOS 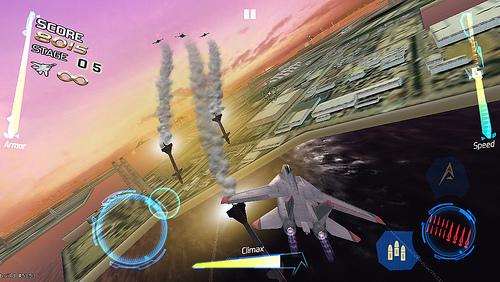 The original After Burner was a smash hit when it hit arcades in the ’80s. This is partly because the cabinet was amazing, but mostly because the game itself was an excellent flight sim. And while iOS users may be out of luck when it comes to playing it from the comfort of their smartphone and/or tablet, it looks like After Burner Climax, a sequel released in 2006, will be making its way on over to Apple’s platform. Bring on the dogfights!

Truth be told, After Burner Climax seems like kind of an odd choice on Sega’s behalf. But the App Store has proven itself to be a pretty comfortable place for shoot ’em ups, so there’s all the potential in the world for the game to be good. It’s certainly going to look good if the screenshot below is anything to go by, so I suppose the only real concern now is whether or not it controls okay.

Personally, I think it would be awesome if this marked the beginning of a mass porting of Sega’s arcade games. They have some pretty excellent ones under their belt, and Sega AM2—the studio that developed After Burner Climax—was also behind hits like Virtua Cop and Hang-On. I mean, can you imagine how good a touch-based version of Virtua Cop would be? Of course you can!