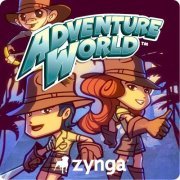 It was only announced less than two weeks ago, but now Zynga’s Adventure World is already playable on Facebook.

The adventure game is the first release from Zynga’s Boston studio and, according to the developer, is the biggest Zynga game yet. It combines an Indiana Jones-style sense of exploration that takes you across five differently-themed worlds, with social features like the ability to form a team with your friends.

You can check out our preview to get a closer look at the game and watch the debut teaser trailer.

Adventure World can be played on Facebook right here.