Home / News / Adobe kills mobile Flash Player – is this the beginning of the end? 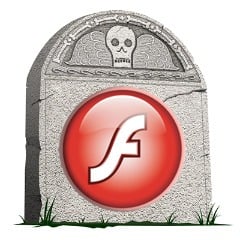 As anyone who has ever used the internet will tell you, Flash has been a pretty big deal. In fact, it seems fairly safe to say that Adobe Flash (or as it was known prior to 2005, Macromedia Flash) single-handedly made things like videos, animations, and browser-based gaming on the internet possible – or at the very least, accessible. When Steve Jobs (may he rest in peace) proclaimed that HTML5 would win out over Flash in the end, the very notion seemed laughable. Now however, it seems as though Jobs is having the last laugh. Wired is reporting that an e-mail was sent out on Tuesday night letting Adobe’s partners know that the company would soon cease developing it’s Flash Player plug-in for mobile browsers. What’s more, the company would be refocusing its efforts in the mobile space on HTML5. The rumor was confirmed this morning in a blog post on the Adobe website, which goes into some detail about why this decision was made; “HTML5 is now universally supported on major mobile devices, in some cases exclusively. This makes HTML5 the best solution for creating and deploying content in the browser across mobile platforms. We are excited about this, and will continue our work with key players in the HTML community, including Google, Apple, Microsoft and RIM, to drive HTML5 innovation they can use to advance their mobile browsers.” The upcoming release of Flash Player 11.1 for Android and BlackBerry Playbook will be its final release, though Adobe state they are committed to providing bug fixes and security updates for existing devices. And this isn’t the total death of Flash on mobile devices -merely the death of the mobile Flash Player. Adobe’s blog post goes on to explan that their “future work with Flash on mobile devices will be focused on enabling Flash developers to package native apps with Adobe AIR for all the major app stores.” While they’re quick to point out that the Adobe Flash Player remains alive and well on PC’s – “Flash Player 11 for PC browsers just introduced dozens of new features, including hardware accelerated 3D graphics for console-quality gaming and premium HD video … [and] we are already working on Flash Player 12,” – the fact still remains that mobile devices are accounting for more and more web traffic every day. In fact according to a recent report from comScore, mobile devices currently account for a whopping 6.8% of the world’s web traffic. Many analysts are predicting that mobile browsing overtaking desktop browsing isn’t so much a case of “if,” but “when.” Taking all of this into account, it’s hard to not look back at what Steve Jobs said in April 2010 and view him as something of a technocentric Nostradamus; “Flash was created during the PC era – for PCs and mice. Flash is a successful business for Adobe, and we can understand why they want to push it beyond PCs. But the mobile era is about low power devices, touch interfaces and open web standards – all areas where Flash falls short… New open standards created in the mobile era, such as HTML5, will win on mobile devices (and PCs too). Perhaps Adobe should focus more on creating great HTML5 tools for the future, and less on criticizing Apple for leaving the past behind.” Jobs might have thought he was chastising Adobe, but as it turns out, he was just giving them really good advice. And they were wise enough to listen. It should be interesting to see if Adobe changes their tune about their PC-based Flash Player by the time version 12 rolls out.