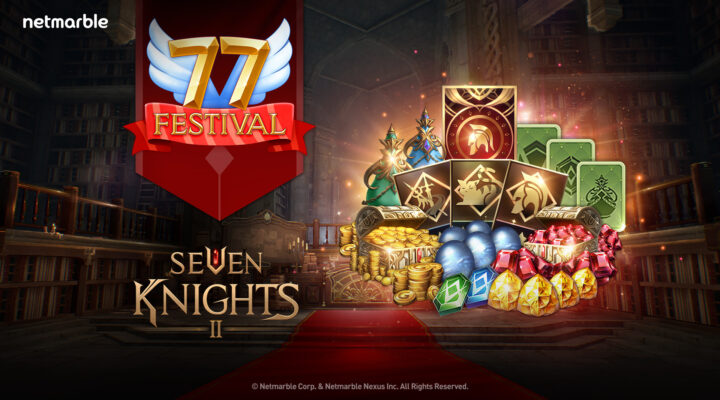 According to superstition, seven is the luckiest number. Netmarble certainly seems to think so.

Not only did the studio release Seven Knights 2 a couple of months ago, but it’s celebrating the game’s 77-day anniversary with a special 77 Festival event. That’s a lot of 7s.

Taking place right now, the Seven Knights 2 77 Festival will give new, returning, and active players the chance to win a whole raft of high grade rewards.

There are new missions to join every day for a chance to achieve the final reward, a coveted Legendary Hero Selection Ticket. Plus, throughout the week of the event you’ll be able to win heroes and collect Legendary Equipment, Pet Summon Tickets, rubies, and more.

Also, the Legendary Hero Vindictive Blade Aquila is available for the first time. This unique character is the game’s first ever support class legendary hero, and it has some powerful support and buffing abilities if you know how to position it during battle.

On top of all that, there are Growth Support and Draw Rate Up Events running now until February 4th, giving you the opportunity to earn Aquila’s Soulstones, among other items.

For the uninitiated, Seven Knights 2 is a gorgeous strategy-RPG that takes place 20 years after the first game in the series. Story-wise, it focuses on the Daybreak Mercenaries, who are on a quest to find the last remaining member of the Seven Knights after a series of run-ins with a mysterious girl called Phiné.

The game boasts a cast of stunningly rendered, richly written characters with their own unique strengths, weaknesses, and – above all – personalities. It also features top notch strategic gameplay and some dazzling skill animations.

Just watch the trailer above.

Now you get it.

The Seven Knights 2 77 Festival will run until February 16th. You can take part now by downloading the game for free on Google Play or the App Store.

G2 Games’s World Quiz Is an Educational Quiz Game that WIll Teach You 5,000 Things