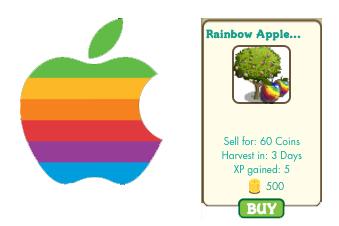 With the launch of FarmVille officially underway on the iPhone, Zynga has included two new in-game items that are exclusive to the handheld device. Both are tongue-in-cheek tributes to iPhone manufacturer Apple – a rainbow apple tree and a snow leopard.

The rainbow apple, for those who may not be familiar, was the logo Apple adopted back in 1977. And while the shape of the apple remains the same in their current logo, the rainbow color scheme was dropped by the company in the late 90’s. The snow leopard, on the other hand, pays homage to the name for Mac’s current operating system, OS X v10.6 Snow Leopard. 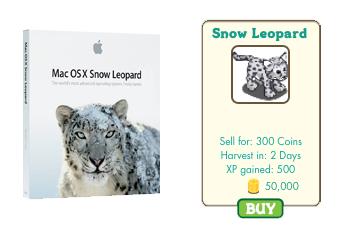 The tree is available for only 500 coins, and harvests 60 coins every 3 days. The snow leopard on the other hand will set you back a whopping 50,000 coins – a heftier price than the common farm animal, but still much cheaper than some of the high end offerings. If you prefer your farming on Facebook, don’t worry — these items will show up in both versions of the game once you acquire them on the iPhone.

FarmVille coming to the iPhone tomorrow (and first look video)

FrontierVille goes up, but Zynga goes down