Home / News / A cut above: How Sally went from spark to salon

A cut above: How Sally went from spark to salon 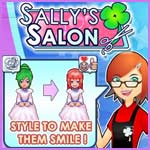 Games Cafe was a company in search of a game. They had narrowed the hunt a little bit, deciding that resource management, a job game, was the way to go. But the question was: Whose shoes did the team want to put the player in to?

“We looked at the time management category, we thought ‘You know what, there’re a lot of hidden object games out there,'” Games Cafe president Steve Shatford said. “Instead of going after that market, we decided that we kind of liked time management. It seemed to appeal to us a lot more as a team.”

Dan Kratt, designer, soon discovered that the answer was no further away than his own living room.

“The original idea was sort of my wife, actually. She’s got a pretty high-stress job and once-in-a-while she comes home from work and says ‘I wish I was just a stylist, a hair dresser,'” Kratt said.

The idea was one that hung in the back of Kratt’s mind until the team started brainstorming their new game.

“I couldn’t shake the hairdresser thing, and I just thought ‘We can make this work in a resource management environment,” Kratt said.

Though it was sort of an unconventional take on the genre, Shatford could see what Kratt was getting at.

“We looked at things that really appealed to our audience and thought ‘You know, everybody needs a haircut,'” Shatford said. “So we wanted to see if we could say something different here, and it turned out really well for us.”

Luckily for casual gamers, the life of a particular hairdresser named Sally was more stressful than Kratt’s wife likely could have imagined.

Though the player would have a lot of different factors to worry about while they were running their salon, the presentation was in line with what Kratt’s wife had originally been after: A way to relax.

Sally’s Salon was designed to be bright, trendy and most of all, relaxing. Kratt said the team even found the inspiration for some of the game’s look from inside the hair world.

“We looked a lot at those Herbal Essences commercials, for the colors, and in the end it just sort of came out like that,” Kratt said. “Salons are more sort of trendier, calmer, semi-relaxing environment.”

From the beginning of the development process, Shatford was adamant that a shop should be a component of the game, a little activity to breakup the chunks of hair washing, styling and drying. But what Kratt soon found was that the more shop he made, the more people wanted.

“After we got it all in, people wanted more, wanted more,” Kratt said. “At a certain point, that became an integral part of the game for people, whereas, from the outset, I was kind of approaching it as a nice little garnish to a resource management game. But it seems to have taken on a life of its own.”

But Kratt knew that the more shopping components he introduced, the more he ran the risk of overcomplicating the game. As the shop became a larger facet of the game, he did what he could to keep the system simple.

“We tried to make it as intuitive as possible, and we weren’t removing people from the environment, so you’ll notice when you go from a level to the shop, it still very much looks like you’re in that level, it’s not like a removed screen,” Kratt said.

The player is also guided by recommendations from the designers as to what items would best suit their shop while not pushing them too much, a balance that wasn’t easy for Pratt to find.

“As a designer, I want to steer the experience, right? But I can’t force people to buy one thing because their path is so narrow that it’s almost no fun,” Kratt said. “So it’s more like ‘Yeah, you should probably get this items, but you don’t have to.”

With the particulars of the game’s design being hammered out, Pratt knew he needed a leading lady. He said that Sally’s cat-eye glasses look was originally inspired by 90s folk-rocker Lisa Loeb. Shatford says the idea just sort of stuck.

“There’s a lot of theory in picking your main character and making sure it appeals to the audience, the development team just seemed to nail that right of the bat,” Shatford said. “There were almost no changes requested, it was just right.”

A little off the top

Sally (both the character and the game) are now complete and working their way to desktops all over the world.

The best works, it seems, often come with few struggles, with either passion or determination always pushing the creators forward. For Kratt and his team, Sally’s Salon was one of those projects, going from a spark from Kratt’s wife to a full-fledged game with relatively few growing pains.

“We definitely had a good time working on Sally,” Kratt said. “It’s kind of a blur, really. That’s the only way to put it.”

The Age of Innocence