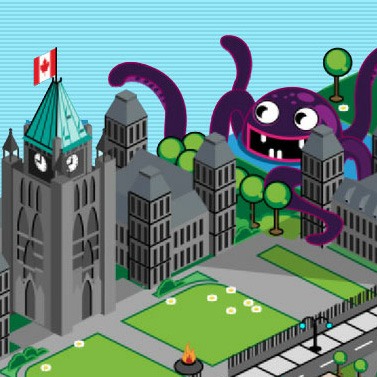 When people think of gaming conferences, they tend to think of events like GDC, WWDC, or Casual Connect. Canada, it would seem, is the furthest thing from their minds. In fact, with the exception of the Montreal International Games Summit (and the somewhat smaller DIG conference in London Ontario), there really isn’t a single annual show where Canadian developers can get together to discuss their craft. Earlier this week, the number of great Canadian game conferences just grew by one, with the debut of the Ottawa Game Conference.

While it might not be as likely a choice for a Canadian conference as, say, Toronto or Vancouver, one look around the room during the keynote and you could see why Ottawa was a perfect city to host such an event. Ottawa has a thriving development community, with teams such as Playbrains, Magmic, Snowed in Studios, and Arctic Empire not only based in the area, but actively involved in bringing the conference to life. Likewise, there seems to be a university crowd that’s chomping at the bit to get into the scene themselves, with a huge cross-section of the audience made up of students from local institutions like Algonquin College and Carleton University.

Everyone in Ottawa, it seems, wants to make games. And the numbers certainly support this fact – the show managed to sell out all 400 tickets before the event kicked off. To put that into perspective, the Montreal International Games Summit (MIGS) made its debut in 2004 with around 300 attendees (or so we were told during OGC’s opening address).

Interestingly, it’s this sense of community – a thriving local ecosystem devoted to the games industry – that became the focus of the show’s keynote. Jason Della Rocca, a strategic consultant and the founder of Perimeter Partners (a firm devoted to developing and fostering game clusters around the world) spoke at length about the importance of developing games in a region that embraces it.

“You can’t innovate and create in a complete vacuum,” says Della Rocca. “You want a lot of variation. You want companies that are big and small, that are doing pure entertainment or more serious stuff, that are doing casual vs hardcore. You want that high degree of variation … To see the diversity that’s in this room is quite exciting, and most of it’s from Ottawa.”

The antithesis of this, if you’re curious, seems to be Rhode Island. 38 Studios packed up their bags and moved the entire team there from Boston in April 2011. A little over a year later, all 379 employees were let go. The problem? With no existing development community in Rhode Island, these developers are stuck with two choices: move, or start their own projects in RI. Ironically, the same situation that makes them the polar opposite of Ottawa also gives them the potential to actually become more like Ottawa. If enough former 38 Studios staffers stay in Rhode Island and start their own development houses, a regional game cluster might just be born.

Much to my surprise, the one moment that really reinforced what a hot spot for game development Ottawa is was a moment that was only peripherally related to the show. In another room in the Ottawa Convention Centre, wedged perfectly between OGC’s registration desk and lecture halls, was a little event room showcasing something called “AppJam.” AppJam, it turns out, is part of TechU.me – a program from the Ottawa Network for Education, in which high school students partner with 3rd graders (who become their clients) to make games, all while being mentored by veterans of the industry. Put plainly, Ottawa is giving their students a chance to really explore the world of game development before they’re even out of high school, and make the connections they’ll need to take their potential careers even further.

With a great collection of speakers and plenty of lessons learned (many of which will be shared on Gamezebo in the coming days), there’s little question that the first Ottawa Game Conference was a resounding success. More importantly, though, it seems that Ottawa is a great town for game development the other 364 days of the year as well. Who knew?