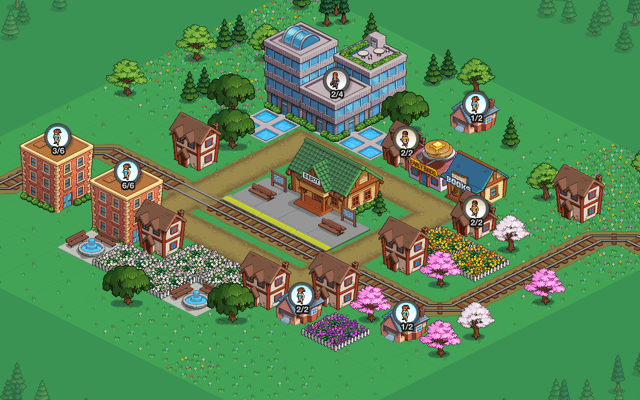 A Bit Lucky is a new games studio formed to create “the next generation of social games.” Their first game, Lucky Train, definitely fits that bill, letting you send and build out trains between friends (and friends of friends) as you build out your county.

We spoke with co-founders Frederic Descamps and Jordan Maynard about trains, the state of social games, and how much luck you need to be a gaming success on Facebook these days.

One of A Bit Lucky’s goals is to create the next generation of transplatform social games. SimCity, Railroad and Transportation Tycoons have always been some of our favourite games. Trains also have a universal and fun appeal as a cultural theme and as toys. Instead of playing a transportation and tycoon game just on a supply chain graph, we thought that it would be a natural fit to adapt the gameplay to the social graph and allow you to play with your friends.

One of the most interesting features of Lucky Train send and share trains among friends within your social network. Can you tell us about this social feature works and how it connects you and your friends (and your friends’ friends) together?

The two main aspects of Lucky Train are: you create train routes among your friends to carry passengers; you build up your city to attract different types of passengers.

The train mechanic makes Lucky Train a more social game as interactions between Lucky Train players are mutually beneficial: better trains and better buildings benefit everybody on a train route. 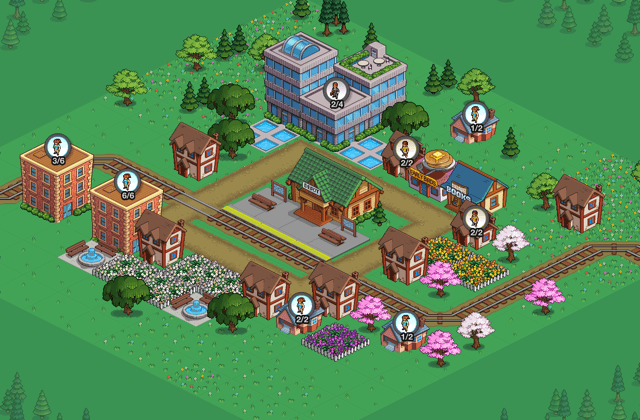 The tycoon aspect of Lucky Train is apparent in the single player gameplay of choosing which friends to send your train to. Your train’s first trip starts with one destination but quickly expands through your social network as you, or your friends, add new destinations to each train’s route. Everyone on the route will then have the chance to send the train on a longer voyage, as well as upgrade the train so that it will travel faster and/or carry more passengers. Adding friends to routes and upgrading trains benefits everyone on the routes because passengers will yield more coins and experience as the trip gets longer.

The coins earned from creating, or joining, longer train routes feeds the city building features of Lucky Train. Elevated with a strong art style and deep content, building your county provides players the opportunity to showoff their creative and strategic abilities. From flowers and trees to banks and baseball diamonds, personalization of your county is virtually limitless.

By the third day the game was live, Lucky Train had already released new themed content such as Independence Day buildings, decorations and a Presidential Train; it’s safe to assume that exciting things are in store for city building enthusiasts. Strategically, selecting which types of properties to purchase and upgrade allows players to position their county depending upon whether they enjoy playing a game with high action, or reward.

Thanks! We are huge fans of pixel art: it allows for a lot of details, gives a toy-like feel to the trains and building as well as conveys this “living world” feel that our game has.

Pixel art is also reminiscent of some of the games that inspired us to make games and especially to make Lucky Train. Some of the best pixel artists in the world are helping us on Lucky Train and their work has been very well received by the Lucky Train gamers so far. 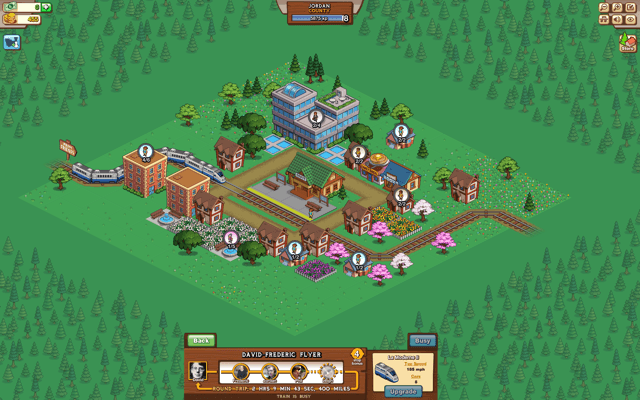 What are achievements and how do you earn them in the game?

We have quite a few available already and are working on some more.

You have of course all the achievements related to leveling up in the game, as well as getting new trains, whether you upgraded your own or a friend’s train.

We have also achievements based on the number of stops on a given train route, on upgrading other people’s trains, on extending other’s train routes, etc.

We have a few more that are hidden and more special but it will be up to you to discover them!

What new features do you plan to add to Lucky Train in the future?

The Lucky Train team is working on adding quite a few more advanced features, including a shipping mechanic in which trains become the mechanism by which players harvest and trade resources used to build more valuable properties.We are also working on other features and the best way to keep up with them is to become a fan of Lucky Train.

What other games or projects are you working on now? How many games do you plan to launch this year?

We have a lot of cool game ideas! It is too early to reveal their details at this point but you can expect some of the same characteristics as in Lucky Train: high production quality, truly social and original gameplay.

Facebook has made a lot of changes to its platform this year, such as removing notifications and pushing Facebook Credits. Do you think a games company needs to be “a bit lucky” or “very lucky” to be a successful on Facebook these days? What is your strategy to break out from the pack?

With hundreds of millions of users, Facebook is the single largest gaming platform in the world. Social gaming is still in its infancy, which means they are a lot of opportunities that can be explored.

A Bit Lucky games combine the best DNA from the traditional online gaming industry and from social gaming. Our goal is to provide online social dynamic content that you can experience with your friends.

Dynamic content is one of the most important aspects of social gaming: not only can you connect directly with gamers but you can take into account their feedback instantaneously and in turn offer them new content very quickly.

Zynga just launched FarmVille on the iPhone. What plans do you have for the iPhone and any other platform or devices?

Our team has developed games for multiple platforms (console, PC, iPhone…) so we are naturally looking at bringing our games to other platforms with a lot of interest.

Can you tell us more about A Bit Lucky? How did you form the company? What are your backgrounds? What’s the story behind the name?

Jordan and I have both been in the gaming industry for a while. Jordan and I met at Trion Worlds and decided to start a Bit Lucky last fall to create the new generation of transplatform social games.

Jordan was quite literally born into gaming as his Dad was one of the first employees at EA. Jordan’s background is both in game development and game design. He spent his teenage and student years as a testing and then game development intern at EA, where he then spent close to seven years working on games such as Spore. Jordan then joined Trion as one of the very first employees as Senior Director of Technical Game Design.

Prior to A Bit Lucky, I was the head of marketing and community at Xfire for over four years then at Trion Worlds.

What are your favorite games (aside from Lucky Train, of course) that you are playing right now?

Our favorite social games at the moment are MonstrosCity, Baking Life, Night Club City and Frontierville. We also play a lot of games on PC, console, iPad, iPhone.

World of Warcraft, Guitar Hero, League of Legends, the Call of Duty series, Global Agenda, Trials HD… are some of our most played games in the office.

Who do you predict will win the World Cup?

Brunhilda and the Dark Crystal sequel confirmed, and Codeminion wants your ideas!