5th Planet Games’ Dawn of the Dragons headed to iOS 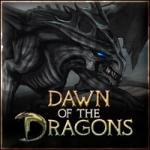 There has been a growing trend in the industry lately of core game developers bringing their AAA titles to the mobile screen. Next in line is 5th Planet Games, who are getting ready to launch a mobile version of their popular Dawn of the Dragons MMORPG on iOS devices next month. This will be 5th Planet Games’ first foray into the mobile scene, but with an already well-established following on Facebook, Kongregate, and Armor Games, there’s no doubt that Dawn of the Dragons will also find a home with dragon slayers on the go!

The iOS version of Dawn of the Dragons will be a reimagining of the original game, with a revamped interface and customized touchscreen controls. Promising to be a unique hardcore social MMO, the game will force players to band together in order to complete a series of quests, raids, and other challenges across a richly imagined world full of mythical towns, dangerous forests, and remote areas overrun by savage tribes. Players can choose to work cooperatively and rid the Kingdom of West Kruna of the invading dragons, or they can compete with one another in player-versus-player battles through Dawn of the Dragons’ popular Guild system, which has become an essential part of the MMO’s full experience.

As more and more “core” games begin to make their way to mobile platforms, it has never been a better time to be a mobile gamer, or a slayer of dragons for that matter! You can look for Dawn of the Dragons on the iOS app store when the game is released sometime in February 2013.

Feast your eyes on 166 game prototypes for the OUYA