Forget lumber, coal, or the milk of human kindness – Twitter is our greatest national resource. For many of us, it’s where we go to find out what’s really going on in the world. Not only is it the place where the news can break, but it’s also the place where news can happen. Even better, it’s the place where we can interact with the newsmakers of the day directly.

As always, there were plenty of great tweeters to follow in 2013. But five in particular gave us some pretty specific tweets that we’re always going to remember, and each for very different reasons. Were there any tweets that stood out as a big deal in your mind this year? Let us know in the comments below, or, better yet, tweet us @gamezebo with your thoughts. Let’s keep this thing in the Twitter spirit!

If you’re not familiar with @PHIL_FISH, you’ve missed out on one of the craziest (and potentially saddest) stories of the year. You’ve also missed out on his game, Fez, which might be even sadder. That game is tremendously good. It’s too bad you’ll never see the sequel.

To put it mildly, Phil Fish is a little criticism-averse. If you’ve seen Indie Game: The Movie, you might already have a good sense of this. Before the game’s release, he’d already developed a love/hate relationship with his audience. Afterwards, it seems as though the scale tipped a little farther in the latter direction.

And it’s not just gamers he’s had a problem with. He had a very public falling out with Microsoft over their fee (in the tens of thousands of dollars) to update a game. He badmouthed Japanese gaming in a 2012 Q&A. He even took a potshot at Zynga, saying that they’re expecting a clone now that they turned down Z’s publishing offer.

In other words, it’s not just his critics that are outspoken.

Still, 2013 will be the year that Phil Fish realized that if you can’t stand the heat, you need to get out of the kitchen. The short version: some developers reached out for comment about a rumor, and Phil Fish lambasted them on Twitter for essentially making stories out of nothing… and then proceeded to have a total meltdown in public. It ended in the above tweet. Fez II was cancelled, @PHIL_FISH became a protected Twitter account, and we haven’t really heard a peep from him since. 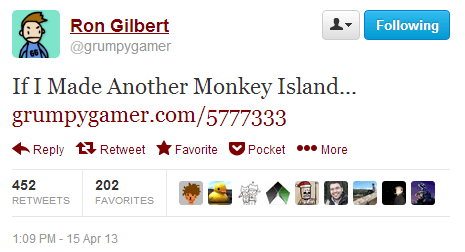 @grumpygamer is a handle that makes a lot of sense in the context of this tweet. It belongs to legendary game creator Ron Gilbert. I could list his massive credentials here, but let’s keep it sweet and short: this is the man who created Monkey Island. And more to the point, this is the man who has no legal rights over the Monkey Island franchise. He’s none too happy about it (and I can’t say I blame him).

Can some billionaire philanthropist just step up to the plate and buy this man the rights to his own game, already? 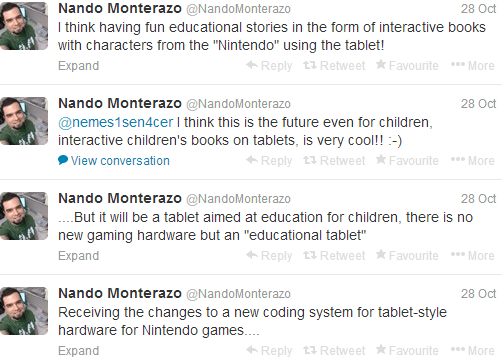 @NandoMonterazo’s Twitter account has been wiped from the face of the earth. It’s almost like it never happened. But luckily it did happen, and we were there to see it. The tweet that started it all. The tweet that created a surprisingly likely rumor: Nintendo might just be working on an Android tablet aimed at the edutainment market.

I don’t say “likely” because this seems plausible, mind you: I say “likely” because Nando Monterazo is a software engineer at Nintendo of America. Maybe. We don’t really know. Nintendo told IGN that “there is no employee at Nintendo named Nando Monterazo now or at the time of the tweets.” But they also said “we don’t comment on rumors or speculation,” which is usually synonymous with “if it’s a no, we would have said no.” And digging a little further, you can see an old tweet from Nando himself that says he’s not a Nintendo employee, but the CEO of a company that makes games for Nintendo.

So is Nintendo working on an Android tablet for kids? Your guess is as good as mine. Reggie Fils-Aime recently acknowledged that they’re starting to play around in the smartphone and tablet market. All I know is I love the idea of Nintendo returning to edutainment software: every kid needs Mario Teaches Typing. 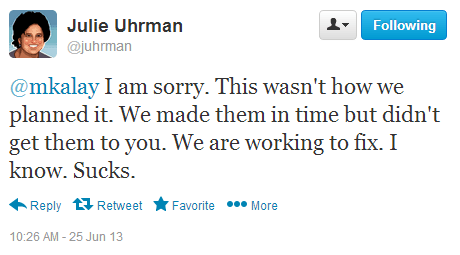 This entry on our list is kind of cheating, because we’re not talking about just one tweet. We’re talking about nearly every one of @juhrman‘s tweets in the latter half of June.

As the founder of OUYA, Julie Uhrman has taken a lot of criticism in 2013. A lot. And much of it is fair. But in late June, when it became apparent that shipping problems were keeping the new OUYA device out of the hands of already angry Kickstarter backers, Julie did something beyond commendable – she took to Twitter to try and address every single complaint directly. Whether it meant looking into a shipment status, arranging a refund, or making sure that her support team responded more promptly, Julie was on it.

The OUYA folks seem to have bungled a fair bit in their launch year, but that doesn’t mean we should ignore the times they’ve tried to make it right. 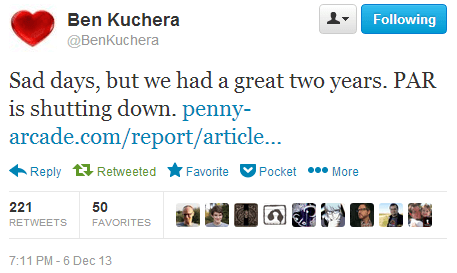 If you’re reading Gamezebo on a regular basis, there’s a very good chance that we’re not your only source for gaming news and reviews. It’s ok. We can take it. We knew what this was going into it. *sobs into pillow*

One of the best sources for gaming news over the last few years was The Penny Arcade Report, a gaming news spin-off from the folks who bring us the webcomic Penny Arcade. Or, at least, it was in name. In reality the whole thing was managed by one of the most respected folks in games journalism, Ben Kuchera. Many of us follow him on Twitter, and that’s where he broke the news: after only two years, The Penny Arcade Report was shutting down. He didn’t offer any explanation in his goodbye post, though if you do a little digging, you’ll find a post on the Penny Arcade comic site that explains what happened. In short: Penny Arcade is shifting its focus, and the future just doesn’t include The PA Report.

Deal of the Day: Bioshock Infinite for $9.99