5 OUYA Games You Should Be Playing on Launch Day

What a long, strange trip it’s been. A little less than a year ago, Julie Uhrman went to Kickstarter with a crazy idea: an Android powered console that would be cheap to develop for, cheap to purchase, and available to backers in a matter of months. After $8.5 million in funding and 350 days, the OUYA is now a $99 reality.

As Kickstarter backers, some of us at Gamezebo have had the good fortune to be playing the system for a few weeks, which gives us a good perspective on which OUYA games will be worth your time. There are plenty of great games that you’ve already played on other systems (Ravensword: Shadowlands, Super Crate Box, Saturday Morning RPG, etc..), but we know what you really want: experiences you’re not likely to find anywhere else. Here are the five titles that we think stand out as the very best:

Chances are, you only have one controller for your OUYA. You’re going to want to fix that immediately. Nintendo gamers have Smash Bros. PC gamers have Awesomenauts. And for OUYA, there’s TowerFall.

Multiplayer archery combat with a sweet retro style, TowerFall is exactly the sort of frantic, kill crazy party game you’ll want to break out to show off your new OUYA to your friends. Even better, it supports Xbox 360 and PS3 controllers, so maybe you won’t need to order a second (third, and fourth) OUYA controller after all!

Does it look a little like someone tried to remake Activision’s Freeway in MS Paint? Absolutely. But don’t let that fool you – No Brakes Valet is the surprise “I can’t stop playing this” game of the OUYA launch.

Players are tasked with parking 20 cars as perfectly as they can. Sounds simple, right? Here’s the catch – you have no control over acceleration. Using only left, right, and brakes, you’ll try and park cars that enter the lot at varying speeds without banging into the vehicles you’ve already parked.

Oh – and every now and then, one of those cars won’t have any brakes. 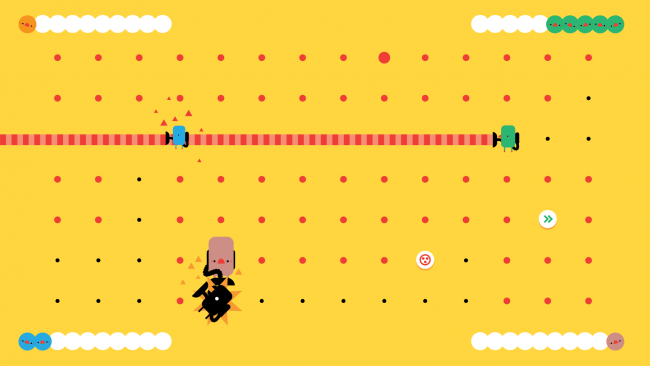 Looking for some full-on proper weirdness for your hot little indie console? MRS. DAD vs KÖRV is the gold standard. A collaboration between the folks behind the upcoming Spin the Bottle (which has the single greatest game trailer ever) and the maker of rymdkapsel, MRS. DAD vs KÖRV is a delightfully quirky pair of games centered around some maddeningly fun multiplayer.  MRS. DAD is about growing big and squashing everyone, while KÖRV has you collecting eggs to bring back to your net before your opponent can do the same.

Did we mention you’ll be playing against your opponent ON THE SAME CONTROLLER?!?!  (And yes, this means four players can  enjoy this one with only two controllers).

Editor’s Note: While we were given the chance to play MRS. DAD vs KÖRV today, you may find it difficult to do the same… YET. The game isn’t on the store quite yet, but developer grapefrukt has confirmed that the game is on track to release later today or tomorrow at the latest.

Like pixel art? How about rhythm gameplay, smarmy humor, and D&D? If you just checked yes on all of those boxes, consider Deep Dungeons of Doom a must-own. The game was the first killer OUYA-exclusive during the pre-launch phase (though a recent iOS release means the “e” word no longer applies).

As the name might suggest, adventurers will find themselves going deep into a dungeon, floor by floor, as they face a variety of nasty creatures. You’ll uncover equipment and upgrade your stats as you go, but as with more convetional roguelikes, when you die you’re dead and there’s no two ways about it. (Unless, of course, you want to revive yourself with a token that’s available via in-app purchase. They’ve got to make money somehow, right?)

You’ll unlock new dungeons and characters as you go that stay unlocked after your death, giving you plenty of reason to come back time and again.

A pair of incredibly short visual novels by bentosmile, Enemy of the Solid State and The Life of a Pacifist are shining examples of why OUYA matters. Neither are big titles, even by indie standards. They’re such tiny projects that each is built around a single idea, and only takes minutes to complete. Nowhere in the existing marketplace could games such as these be given a place to shine. The OUYA, at least in these early days, seems to be making a valiant effort to change that.

Enemy of the Solid State is a short spy story that pokes fun at the nature of ever-changing technology. The Life of a Pacifist is a commentary on game development, and how difficult it is to work for a large studio when your morality doesn’t line up with big guns and gore.

Free Games and Sales: Sonic the Hedgehog, Fez and more!