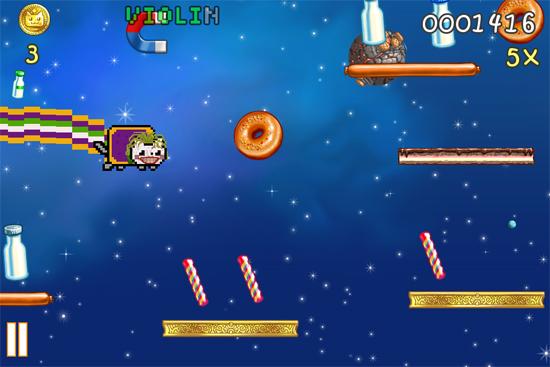 Love typing hilarious phrases on pictures of cats?  Spamming your friends with high score notifications?  Wishing there was a way to combine the two?  You’re in luck!  There are actually thousands of ways, but not all of them deserve to steal time away from the newest Rage Comics generator.

We’ve picked a handful that should slake your urge for playable – and worth playing – games based on memes.  Because we don’t always write lists about memes, but when we do… well, you get the idea.

Nyan Cat: Lost in Space
Based on: Nyan Cat

True to its meme inspiration, Nyan Cat: Lost in Space features our poptartted feline hero bounding through the endless expanse of space to the same addictively inane tune.  Nyan needs to jump between platforms, and over obstacles like dogs and aliens, to keep himself and your score moving forward.  Special abilities, like “supernyan,” “adrenyalin,” and “doggienyan,” give Nyan useful abilities (and outfits) for a short period of time.  What began as a fairly simple game in 2011 has become more fleshed out thanks to frequent updates that continue today: a graphical overhaul, costumes for Nyan (he’s adorable as The Joker), various stage backgrounds, new abilities, and even a whole “milk” system for earning extra bonuses have been introduced since its initial release, creating more than an amazing meme game: a fantastic game, period.

Based on: Breading Cats

Despite hesitations to include two cat-related games on this short list (a tough order anyway, considering cats basically invented the internet), Bread Kittens has earned its spot with a unique and simplified combination of the monster-battling and restaurant genres.  Gameplay is split between baking bread—the real time-based portion of the game—and fighting and collecting cats in turn-based battles. What makes Bread Kittens even more appealing is its presentation: unlike the average “Haha, funny meme game,” it uses the “bread on your cat” joke as merely a basis, turning it into a beautiful game complete with plot and purpose.  All the feral cats of the world have been brainwashed by the evil ChowCorp and the only way to calm them (and add them to your cat battle squad) is by “breading” them.  Bread is also used as status and defense-increasing armor so that you can have a better chance against stronger cats, like Maine Coons, giving further substantiation to the meme itself.  Although Bread Kittens sometimes feels a little lacking in gameplay, it makes up for this in presentation, humor, and of course, major adorableness.

One of the few non-humorous memes to make it to internet stardom, Slenderman is “creepypasta” royalty, having inspired dozens of games and even the “Enderman” in Minecraft.  The tall, faceless, and possibly-imagined Slenderman began as a disarming bystander Photoshopped into otherwise normal pictures, turning them into conspiracy cover-up spoofs.  Slenderman’s unknowable visage and constant hovering between existence and imagination made him an excellent candidate for a survival horror game creature.  Slender: The Eight Pages utilizes Slenderman and his folklore superbly, as players wander around a dark forest collecting pages containing warnings such as “Don’t look or it takes you.”  Each page collected causes the distant Slenderman to spawn closer to the player, threatening death if he gets too close or you stare at him too long.  The simplicity of the game, its goal, and Slenderman’s quietly terrifying presence combine to create an experience that’s very easy to lose yourself in, and a monster that’s hard to forget.

If we handed out awards for most delayed meme-to-game transitions, Cowbell Hero would sweep the event.  Luckily, like Bread Kittens, it goes far beyond its aged meme to deliver a surprisingly high-quality experience.  Playing similar to most Guitar Hero-inspired music games, you tap and hold notes as they stream from the top of the screen in time to the tune.  This time, however, you’ll be playing the cowbell part in songs that prominently feature it—including, of course, “Don’t Fear the Reaper.”  Beyond the cowbell-heavy 16 main and 10 bonus tracks (including one Dubstep remix, wubwubwub), Cowbell Hero puts significant focus on story mode, and its hero’s dream of becoming a music legend and taking the cowbell with him to the top.  A meme that’s significant enough to be recognizable 12 years after its inception deserves a serious game, and Cowbell Hero delivers that and more…cowbell.

Based on: “Gangnam Style” by PSY

Back in October, there were no Gangnam games available: apparently because they were all fighting their way through Apple’s approval process simultaneously.  Now there are hundreds, and the speed at which they appeared should be indicative enough of their overall quality: meh.  Some, like 8-Bit Gangnam Style, are charming yet ruined by terrible controls; most others feature Psy in some capacity but not even a breath of the song that defines the meme.  Ultimately, a Gangnam game needs two things: decent gameplay and some recognizable version of the song “Gangnam Style.”  Gangnam Dance School actually has both of these: you’ll run Psy through a haunted forest, leaping over werewolves, diving under bats, and maneuvering between trees towards the 700 meter end goal while a non-vocal version of “Gangnam Style” plays in the background.  Gangnam Dance School‘s biggest deterrent at the moment—besides the totally nonsensical Halloween setting—is its obtrusive ads that cannot be removed.  The good news is you can hide ads for each run simply by pausing and then un-pausing the game.  Even with this trick, Gangnam Dance School is admittedly the weakest entry on this list, but sometimes you just need your oppan Gangnam fix.

I Took an Arrow in the Knee

Based on: Skyrim‘s “I took an arrow in the knee”

Although everyone was tired of “Arrow in the knee” after one week, that didn’t prevent the infamous Skyrim phrase from landing on t-shirts, television shows, and meme-based games.  I Took an Arrow in the Knee didn’t make this list due to twitchy controls and lack of variation, but this arrow-shooting game deserves a mention if only for the hilariously creepy backstory it provides to every Skyrim guard’s complaint.

Based on: Honey Badger

You know a meme game is dedicated to its source material when it gets the original meme creator to provide narration.  The Honey Badger Don’t Care is actually a surprisingly polished game with colorful cartoon visuals and tons of honey badger commentary from Randall himself, including “Look, he’s digging and eating, digging and eating” and “Woah, honey badger has got to chill.”  Unfortunately, sloppy controls and consistent lag make The Honey Badger Don’t Care more frustrating than filling.

Based on: The Annoying Orange

This one admittedly lost points before ever being played simply because the Annoying Orange gives me the creeps, but it earned some back by not being a Fruit Ninja clone.  Instead of slashing fruit, you toss them various distances while aiming for blenders, chopping blocks, and a Christmas stocking.  With different sizes and difficulties of fruit, three types of levels (popping balloons with star fruit is quite entertaining), and plenty of commentary from the Annoying Orange himself, Annoying Orange: Kitchen Carnage is a decent little diversion—for anyone who doesn’t mind fruit with weird faces.