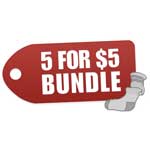 Lunar Workshop and four other indie developers have teamed up to bring you the Five for Five bundle, a collection of five complete indie games being offered for just $5 USD until July 3. The DRM-free bundle includes the action-strategy dungeon crawler Delve Deeper, the artillery strategy game Digitanks, the co-op shooter Mactabilis, the action puzzle game Spring Up Harmony, and the top-down shooter Steel Storm: Burning Retribution.

“I’m always looking for new ways to please our fans, so I wanted to bring these fun indie games to a broader audience,” said Jorge Rodriguez, Lunar Workshop CEO and organizer of the sale, “For the cost of a quick lunch or a movie rental, you’re getting countless hours of entertainment. I challenge you to find a more fun way to spend your next five dollars.”

The Five for Five bundle includes:

Grab your Five for Five today at http://www.buygamesnotsocks.com through July 3.

Zynga sues for Vostu for copying its games. Pot calling the kettle black?