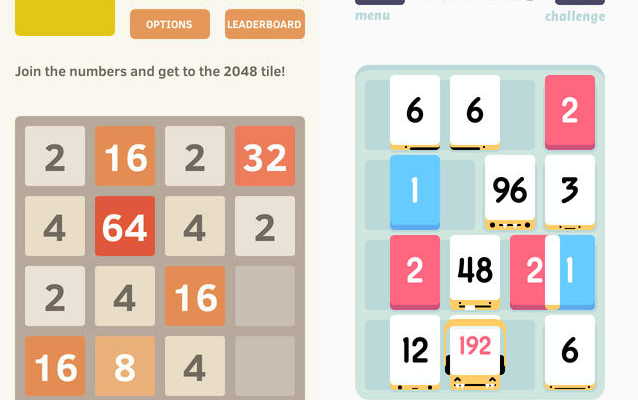 Our story starts a little over seven weeks ago. Sirvo LLC, better known as Greg Wohlwend and Asher Vollmer, released their second mobile game collaboration: Threes!. It was a great little puzzle game that had the perfect mix of addictive and charming that can help a game shoot to the top of the App Store. And it did. Seemingly within hours, this indie darling jumped to the #1 spot – and not just any #1 spot, but the #1 spot on the paid games list.

Rumors of paid mobile gaming’s death, it would seem, were greatly exaggerated. 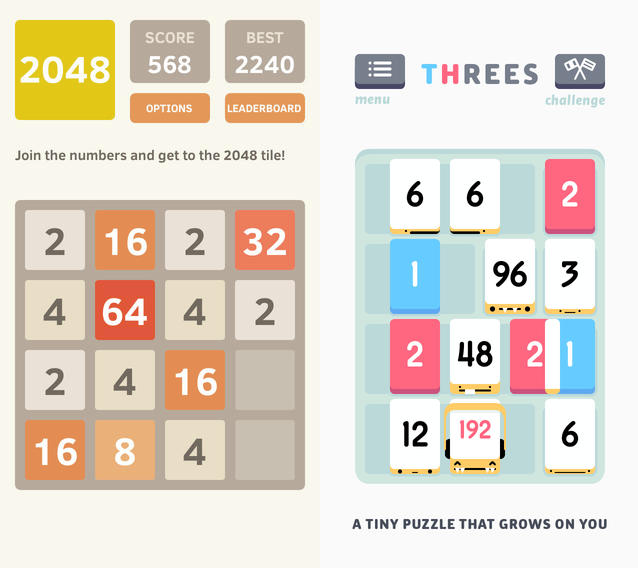 A UI designer and web developer, Gabriele Cirulli “created” 2048 in the span of a weekend. You may have noticed my use of quotation marks there. That’s because, while he no doubt programmed the game and did the art, the creative process – aka developing an original idea and making it work – lays at the feet of Team Sirvo.

Actually, it’s a clone of 1024, which is another clone of Threes, which… yeah. This is starting to make my head hurt.

Interestingly, though, Cirulli doesn’t appear to be the one reaping the benefits here. His version of 2048 that came out on March 9 is web-based (and playable in your phone’s browser). The versions that are currently topping the App Store and Google Play are clones of his work. 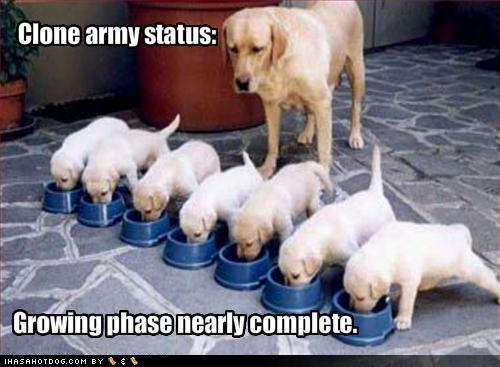 The App Store versions, like the web-based version, are free, while Threes is a paid game. It’s a terrible situation for Wohlwend and Vollmer. As popular as Threes is, it’s pretty much impossible to have the same kind of virality with a paid game as you can a free one.

“Been in a bunch of airports this past week,” Vollmer tweeted recently. “Seen people playing 2048 in all of them. This is frustrating.”

Even more frustrating, though, is the accusations that have been hurled Wohlwend and Vollmer’s way: that their game is the clone, and not 2048.

“It’s all in good fun,” the pair wrote in a recent blog post addressing the situation. “At least we’d like to think so, but try as our logical brains might, we still got the same ‘cloning feeling’. Especially when people called Threes, a game we poured over for nearly a year and a half, a clone of 2048. Others rifled off that they thought 2048 was a better game than Threes. That all stung pretty bad. We know Threes is a better game, we spent over a year on it. And obviously, Threes is the reason 2048 exists.”

The same blog post goes on to show the whopping 570 emails that led to the creation of Threes, starting all the way back in December 2012. It’s a long read, so pack a lunch – but it’s well worth it. (Sidenote: we had a pretty great article on the making of Threes ourselves back before all two thousand and forty eight pieces of @#$% hit the fan – be sure to give it a read sometime, too!)

Greg and Asher email each other… a lot.

Cloning has been a problem in video games since the very beginning (see Ms. Pac-Man’s origins as Crazy Otto). Yet with the advent of mobile gaming, it’s seemingly gone from being the exception to being the rule. And indie game developers seem to be the target of such plagiarism more often than their AAA counterparts. Everyone and their mother (including Zynga) was happy to rip off of NimbleBit’s Tiny Tower formula. Triple Town‘s creators were blindsided by a publisher they were in talks with who released a similar game. And yes, even Threes creator Greg Wohlwend has been to this rodeo before. He was a collaborator on Ridiculous Fishing – aka the game that was cloned two years before it ever saw the light of day. (Though I’ll still maintain that there’s a difference between cloning and iteration, and I’m not totally sure that Ninja Fishing crossed that line).

With so many 2048 clones flooding the market right now (according to a search on App Annie, you can find 256 of them on Google Play alone), and so many “flappy” games clogging up the charts last month, isn’t it time that Apple and Google finally did something? 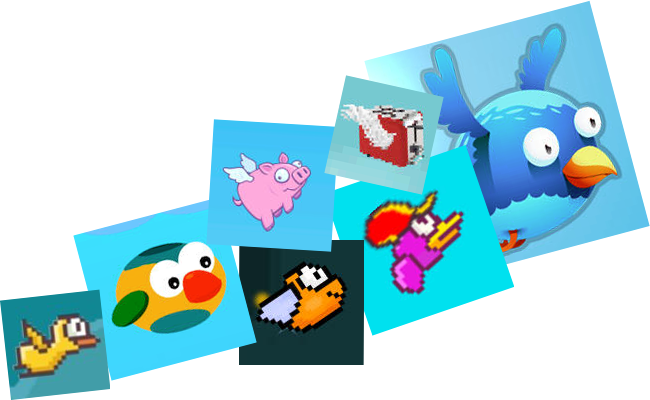 Independent game developers are long overdue for their Network moment. To paraphrase the great Howard Beale, “I’m a developer, goddamn it! My games have VALUE!”

It will never happen, but as far as I’m concerned, Apple and Google need to get a whole lot tougher in their approval process. They need to be picky about what they let in and they need to be willing to shut out anything that’s a blatant copy of somebody else’s work. They also need to have responsive developer support that can shut down the few copycats that manage to slip through the cracks.

They need the Nintendo Seal of Quality, even if it flies in the face of everything that’s made the App Store great to develop for. The market is flooded, it’s almost all crap, and when something brilliant does shine through, clones kill any profitability it may have.

And then what will be left to clone?