Home / Features / 10 Of The Most Sarcastic #E3predictions

10 Of The Most Sarcastic #E3predictions 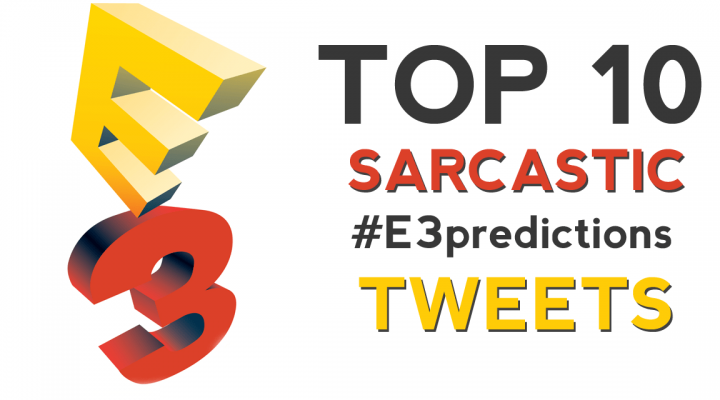 In the days and weeks leading up to the annual Electronic Entertainment Expo (E3) in Los Angeles, video game enthusiasts always like to try and predict what big announcements will be made at the massive industry event.

“Microsoft will reveal a new franchise this year.” “Sony’s Vita lineup will rely heavily on indie games in 2015.” “Nintendo is releasing a proper Star Fox game.” (fingers crossed on that last one)

Thousands of you took to Twitter to voice your #E3predictions, and there are some really great ones that have a good chance of being spot-on. However, as I lurked through weeks and weeks of tweets, I saw more than a handful of people posting hilariously sarcastic #E3predictions. So being the diligent Gamezebo bear that I am, I clawed my way through the huge pile of tweets and present to you ten of the best, sarcastic #E3predictions tweets.

#e3predictions a smaller, portabler version of the Wii is announced. It's called "The Wee Wii"

kingdom hearts 3, 4, 5, and 6 released all at once next month. square officials embarassed, thought they were out already #e3predictions

Despite valiant efforts by devs and publishers, no one will care about sports games. #e3predictions

#e3predictions a bunch of old white men in suits really "get" what I, the gamer, wants. only… on xbox one.

#e3predictions Nintendo will finally confirm that Shigeru Miyamoto was never real, he was in your heart the whole time.

#E3predictions Someone will say "This time, we're all about the games" and then proceed to talk about non-gaming things.