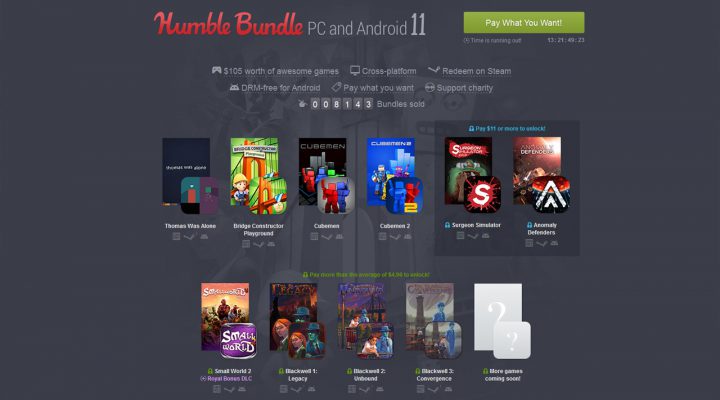 Humble has just launched a new Android-friendly bundle today, a little over a week after Humble Mobile Bundle 7 was revealed.

The Humble PC and Android Bundle 11 includes a starting selection of ten games split into three pricing tiers. All of these games come DRM-free for Android users, while Steam codes are also distributed for buyers keen on playing the games on their PC.

Pay what you want for:

Beat the average (currently $4.60) for previously mentioned games and:

Paying $11 or more gets buyers all previously mentioned games and:

Additional games are set to be added to the bundle in the near future.

If you’re weird like me and played the fourth (and final) Blackwell game first, than this bundle is a great way to catch up on everything that happened previously. By the way, I really liked Blackwell: Epiphany.

It’s also worth mentioning that the soundtracks for all of the games (except for Bridge Constructor Playground) come with the purchase of the respective games.

The 8 Best iPhone and iPad Games on Sale Right Now